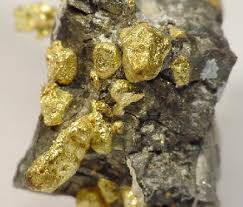 Because of the softness of pure (24k) gold, it is usually alloyed with base metals for use in jewelry, altering its hardness and ductility, melting point, color and other properties. Alloys with lower carat rating, typically 22k, 18k, 14k or 10k, contain higher percentages of copper or other base metals or silver or palladium in the alloy. Copper is the most commonly used base metal, yielding a redder color.

Eighteen-carat gold containing 25% copper is found in antique and Russian jewelry and has a distinct, though not dominant, copper cast, creating rose gold. Fourteen-carat gold-copper alloy is nearly identical in color to certain bronze alloys, and both may be used to produce police and other badges. Blue gold can be made by alloying with iron and purple gold can be made by alloying with aluminium, although rarely done except in specialized jewelry. Blue gold is more brittle and therefore more difficult to work with when making jewelry.

Fourteen- and eighteen-carat gold alloys with silver alone appear greenish-yellow and are referred to as green gold. White gold alloys can be made with palladium or nickel. White 18-carat gold containing 17.3% nickel, 5.5% zinc and 2.2% copper is silvery in appearance. Nickel is toxic, however, and its release from nickel white gold is controlled by legislation in Europe.

Alternative white gold alloys are available based on palladium, silver and other white metals,

[39] but the palladium alloys are more expensive than those using nickel. High-carat white gold alloys are far more resistant to corrosion than are either pure silver or sterling silver. 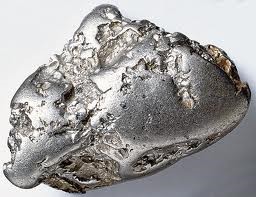 Platinum is a white metal, but unlike gold it is used in jewelry in almost its pure form (approximately 95% pure). Platinum is extremely long wearing and is very white, so it does not need to be rhodium plated like white gold does. It is very dense and heavy metal, so a platinum ring will feel heavier than an 18kt gold ring. Platinum wedding ring is, however, significantly more expensive than gold. With all other things being the same, a platinum ring will be approximately twice the price of an 18kt white gold ring.

Platinum is a prestige choice and is often chosen for its sophisticated appeal and popularity amongst the rich and famous. It is normally not used in the full range of jewelry products due to its higher price. A platinum wedding ring is mainly used in ladies engagement rings, ladies wedding rings and men’s wedding rings. It can also be used to make dress rings, though it is not commonly used to make earrings, pendants, bracelets or necklaces. 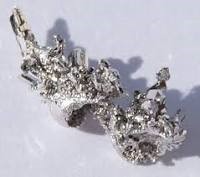 Palladium is a white metal which is has a silver-grey-white color and is similar to platinum. Palladium is one of the metals that is part of the platinum group of metals. The platinum group metals share similar chemical properties. It is well suited to use with engagement rings and wedding rings. A few short years ago the price of palladium was actually higher than platinum, however, the price of palladium is now lower than platinum, making it a more affordable option.

Titanium is a natural element which has a silver-greyish-white color. Titanium is the hardest natural metal in the world. It is very strong, three times the strength of steel and much stronger than gold, silver and platinum and yet is very light weight. Pure titanium is also 100% hypo-allergenic which means that it if safe for anyone to wear as it will not react to your skin. It provides several unique factors that make it a good metal for jewelry. It is very strong, more dent, bend and scratch resistant than gold, silver and platinum, is lightweight and importantly offers an exotic array of colors which other metals simply do not. Titanium and white gold wedding ring One factor to consider with titanium is that titanium cannot be soldered, which means that titanium rings cannot normally be resized. Titanium is popular in earrings and bracelets for both ladies and men. 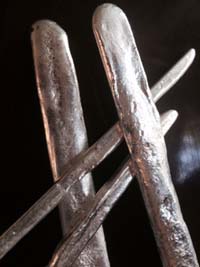 Jewelry and silverware are traditionally made from sterling silver (standard silver), an alloy of 92.5% silver with 7.5% copper. In the US, only an alloy consisting of at least 90.0% fine silver can be marketed as “silver” (thus frequently stamped 900). Sterling silver (stamped 925) is harder than pure silver, and has a lower melting point (893°C) than either pure silver or pure copper.[7] Britannia silver is an alternative, hallmark-quality standard containing 95.8% silver, often used to make silver tableware and wrought plate. With the addition of germanium, the patented modified alloy Argentium Sterling silver is formed, with improved properties, including resistance to firescale.

Sterling silver jewelry is often plated with a thin coat of .999 fine silver to give the item a shiny finish. This process is called “flashing”. Silver jewelry can also be plated with rhodium (for a bright, shiny look) or gold (to produce silver gilt).

For platinum, gold, and silver jewellery, there are many techniques to create finishes. The most common are high-polish, satin/matte, brushed, and hammered. High-polished jewellery is by far the most common and gives the metal a highly reflective, shiny look. Satin, or matte finish reduces the shine and reflection of the jewellery and is commonly used to accentuate gemstones such as diamonds. Brushed finishes give the jewellery a textured look and are created by brushing a material (similar to sandpaper) against the metal, leaving “brush strokes.” Hammered finishes are typically created by using a rounded steel hammer and hammering the jewellery to give it a wavy texture.

Diamonds – Please see the Diamond segment of this website.

Emeralds are one of the three main precious gemstones (along with rubies and sapphires) and are known for their fine green to bluish green colour. They have been treasured throughout history, and some historians report that the Egyptians mined emerald as early as 3500 BC.

Rubies are known for their intense red colour and are among the most highly valued precious gemstones. Rubies have been treasured for millennia. In Sanskrit, the word for ruby is ratnaraj, meaning king of precious stones.

The most popular form of sapphire is blue sapphire, which is known for its medium to deep blue colour and strong saturation. Fancy sapphires of various colours are also available. In the United States, blue sapphire tends to be the most popular and most affordable of the three major precious gemstones (emerald, ruby, and sapphire).

A star sapphire is a gemstone composed of corundum, aluminum oxide, which displays asterism. This phenomenon arises from the presence in the gemstone of tiny strands of minerals that capture and reflect light in a star pattern. The star, which appears to move around as the position of the sapphire changes, usually has six rays, but 12-ray stars also sometimes occur. Star sapphires come in several colors, including blue, rose, smoky brown and translucent, which is especially prized.

Amethyst has historically been the most prized gemstone in the quartz family. It is treasured for its purple hue, which can range in tone from light to dark.

Garnets, best known as gemstones by most people, are a mineral group with chemical and physical properties which are closely related to one another. Six main garnet types are used for gemstones: almandine, andradite, grossularite, pyrope, spessartine and uvarovite. 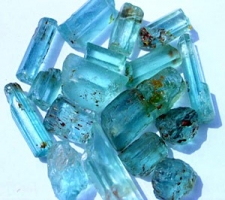 Aquamarine is a blue to green-blue variety of precious beryl. The beryl group of minerals is most famous for chromium-rich, green emerald, which happens to be one of the ‘Precious Four’ gems of the world (diamond, sapphire and ruby are the remaining three). Aquamarine is one of the official birthstones for those born in March. Aquamarine is exceptionally hard and has an outstanding glass-like luster. It is most famous for its breathtaking sea-blue colors which can range from light blue to dark blue. The name ‘Aquamarine’ was derived from an old Latin expression which meant ‘seawater’. 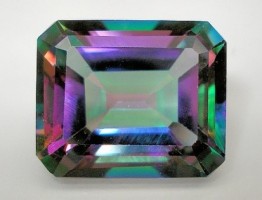 Topaz is an aluminium silicate that contains fluorine and hydroxyl. In its pure form it is colourless (white). Impurities are what cause variations in colour. Topaz has a history that goes back at least two thousand years. The use of topaz goes back to Egyptian times when the ancient Egyptians believed that yellow topaz received its golden hue from the Sun God, Ra. Some believe that “topaz” is a Middle English word, which was acquired from the Old French word “Topace” and Latin “Topazus”, the root of which is in the Greek word “Topazios” or “Topazion”; the ancient name of an island in The Red Sea where the ancient Greeks mined a yellow gem that they believed to be topaz. The name of the island means “to seek” in Greek.

The value of the pearls in jewelry is determined by a combination of the luster, color, size, lack of surface flaw and symmetry that are appropriate for the type of pearl under consideration. Among those attributes, luster is the most important differentiator of pearl quality according to jewelers. All factors being equal, however, the larger the pearl the more valuable it is. Large, perfectly round pearls are rare and highly valued. Teardrop-shaped pearls are often used in pendants.

Opal is the product of seasonal rains that drenched dry ground in regions such as Australia’s semi-desert “outback.” The showers soaked deep into ancient underground rock, carrying dissolved silica (a compound of silicon and oxygen) downward. During dry periods, much of the water evaporated, leaving solid deposits of silica in the cracks and between the layers of underground sedimentary rock. The silica deposits formed opal.

Amber, an ancient organic gemstone, is composed of tree resin that has hardened over time. The stone must be at least one million years old to be classified as amber, and some amber can be up to 120 million years old.

Jade is most commonly associated with the colour green but can come in a number of other colours as well. Jade is closely linked to Asian culture, history, and tradition, and is sometimes referred to as the stone of heaven.

Onyx is a banded variety of chalcedony. The colors of its bands range from white to almost every color (save some shades, such as purple or blue). Commonly, specimens of onyx contain bands of black and/or white.

Jasper is a gemstone of the chalcedony family that comes in a variety of colours. Often, jasper will feature unique and interesting patterns within the coloured stone. Picture jasper is a type of jasper known for the colours (often beiges and browns) and swirls in the stone’s pattern.

Quartz refers to a family of crystalline gemstones of various colours and sizes. Among the well-known types of quartz are rose quartz (which has a delicate pink colour), and smoky quartz (which comes in a variety of shades of translucent brown). A number of other gemstones, such as Amethyst and Citrine, are also part of the quartz family. Rutilated quartz is a popular type of quartz containing needle-like inclusions.